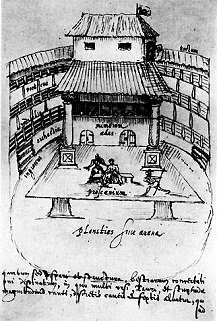 The tour is free, although we ask people to pay a deposit of £3 per ticket via Eventbrite. This will be refunded after the walk for those who attend, no-shows will not be refunded.

Think of Whitechapel and whatever you think off you probably don’t think of the theatre. But in 1567, Whitechapel was the location of London’s first purpose-built theatre, the Red Lion. Ten years later, around the corner in Shoreditch a new theatre, The Theatre, had opened and the area continued to thrive as a centre for theatrical activity.

On this walking tour we’ll visit the sites of some of Elizabethan and Jacobean London’s most important theatres in east London: the recently rediscovered Curtain, where Henry V was first performed; The Fortune, for which the original dimensions still survive; and The Red Bull, notorious for attracting rowdy and occasionally criminally violent audiences. Today, with its clubs and pubs, galleries and shops, east London remains a centre for entertainment and this walking tour will seek out its origins as a place of play.

Also contributing will be Julian Bowsher, Senior Archeologist from Museum of London Archeology.