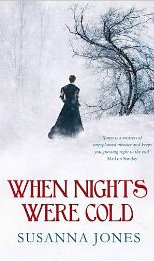 Novelist and Senior Lecturer in Creative Writing at Royal Holloway, Susanna Jones, reads from her book When Nights Were Cold (2012). Described as ‘A vivid, shivery tale of obsession and emancipation in Edwardian England . . . Eerily atmospheric’ by Marie Claire, this is the first in the 2012/13 season of lively and regular free lunchtime readings by established authors, presented by Royal Holloway’s English department.

Susanna Jones graduated in Drama/Theatre Studies from Royal Holloway College in 1988. She subsequently worked abroad, in Japan and Turkey, as an English teacher and radio script editor. In 1996 she studied for an MA in Novel Writing at the University of Manchester. She was lecturer in Fiction Writing at the University of Exeter from 2003-5. Susanna is the author of four novels, ‘The Earthquake Bird’ (2001), ‘Water Lily’ (2003), ‘The Missing Person’s Guide to Love’ (2007) and ‘When Nights Were Cold’ (Mantle, 2012). She edited ‘The Illustrated Brighton Moment’ (2008) and has also published short stories, articles and book reviews for publications including BBC Radio 4, The Guardian, The New Statesman, The Observer and Literary Review. Her writing has been translated into twenty languages and won several awards: The CWA John Creasey Dagger (2001), John Llewellyn Rhys Prize (2001), Betty Trask Award (2002), Book of the Year (for the Hungarian edition, 2004). ‘When Nights Were Cold’ has been selected for Fiction Uncovered 2012, a major promotion to uncover the best of British fiction. She is currently working on short stories and her fifth novel. She teaches on the Creative Writing MA at Royal Holloway, University of London, and supervises practice-based PhDs.