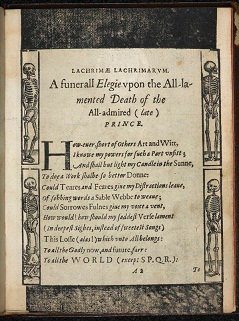 Henry, Prince of Wales would have become King Henry IX had he not died at the age of 18. His importance in life and the impact of his death was reflected by his funeral, which was considerably bigger than that of Queen Elizabeth I nine years earlier.

A contemporary recorded the sight of the people of London lining the streets: ‘There was to bee seene an innumerable multitude of all sorts of ages and degrees of men, women and children … some weeping, crying, howling, wringing of their hands, others halfe dead, sounding, sighing inwardly, others holding up their hands, passionately bewayling so great a losse, with Rivers, nay with an Ocean of teares.’

Join us for a philosophical discussion on death, led by Dr Michael Takeo Magruder of King’s College London.

In 2010, Michael was selected to represent the UK at Manifesta 8: the European Biennial of Contemporary Art and several of his most well-known digital artworks were added to the Rose Goldsen Archive of New Media Art at Cornell University. Michael is currently a Leverhulme Trust artist-in-residence at King’s College London collaborating with Prof. Ben Quash (Theology, KCL) and Alfredo Cramerotti (Director, MOSTYN Wales & Research Scholar eCPR University of Wales, Newport) to research and develop a new body of New Media artwork – entitled Real-time Histories of Conquest, War, Famine & Death – that is based on The Book of Revelations.