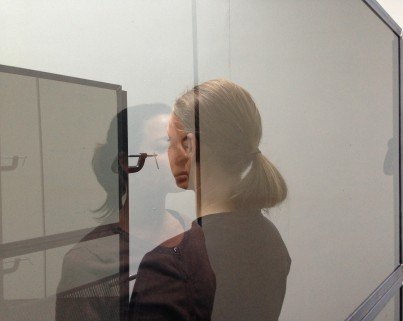 FREE, by appointment only. Booking essential.
Please email via the BOOK NOW link.

(Un)touched is a collaboration between internationally acclaimed sculptor Nathaniel Rackowe and choreographer Angela Woodhouse.  The project has researched the development of a shared space for performers and viewers playing with intimacy and division.  The installation references the materiality of the city incorporating light, mesh and glass.

Angela Woodhouse
Since 1997 Angela Woodhouse has developed a number of innovative dance performance and installation works, many in collaboration with artist Caroline Broadhead. Intrinsic to these works has been the potency of intimacy and of near or actual touch between viewers and performers. Key works include Court (2003-6), Sighted (2009) commissioned by Deloitte Ignite, Covent Garden, and Censored (2010) commissioned by Woking Dance Festival in collaboration with Tate Artist Rooms – Jenny Holzer. The current work Between (2011) premiered at Trinity Laban and continues to tour, most recently Yorkshire Sculpture Park and at Central St Martin’s School of Art in collaboration with The Place Theatre, London

Stine Nilsen (Dancer)
Stine Nilsen was born in Norway and moved to London to train at Trinity Laban. After completing her BA she worked with choreographers Angela Woodhouse, Jeremy James and Emilyn Claid before joining Candoco Dance Company in 2000. In 2006 Nilsen completed her MA Professional Practice (Inclusive Dance Practice) at Middlesex University, and she continues to be passionate about working with disabled and non-disabled dancers as Co-Artistic Director of Candoco since 2007.
Nilsen has worked with Angela Woodhouse on a number of projects since 2000, most recently the installation Between (2011).

Martina Conti (Dancer)
Martina Conti (1984), originally from the Republic of San Marino, trained in contemporary dance at Trinity Laban. She worked as performer with theatre directors Firenza Guidi and Silvia Costa, and is actively involved in the Italian experimental theatre and dance scene. Conti has presented her work as a choreographer and performance artist at the Biennial of Young Artists of Europe, Santarcangelo Festival, Museum of Contemporary Art Villa Croce (Genova), Atelierhaus Salzamt (Linz), World Event Young Artists. She is also part of Little Constellation, network of contemporary art focussed on geo-cultural micro-areas and small states of Europe, and of A Natural Oasis, a group of artists and cultural researchers selected for Mediterranea 15. Conti’sprevious collaborations with Angela Woodhouse include Fine Line (2006), Sighted (2009) and Between (2011).