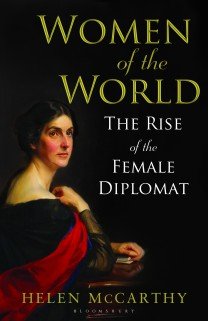 Join celebrated historian Helen McCarthy, from Queen Mary University of London, whose recently published book, Women of the World, the Rise of the Female Diplomat, has uncovered the stories of women who sought influence and adventure on the world stage.

Chaired by Prospect’s Digital Editor, Serena Kutchinsky, the discussion will ask why was it that until 1946, no British woman could officially represent her nation abroad? Why was it that only after decades of campaigning and the heroic labours performed by women during the Second World War that diplomatic careers were finally opened to both sexes?

Helen will launch the discussion by setting the historical scene focusing on why it took so long for diplomacy to open its doors and how that historical legacy still lingers in the 21st century. The discussion will then be expanded to the wider panel, and ask why are women still so poorly represented in politics, indeed in many areas of public life, military, sport, investment banking, political journalism and academia? Is there anything distinctive about these particular worlds that make them particularly resistant to gender diversity?

Is there something inherent in British culture that needs to change?

Julie Bindel, English writer, feminist and co-founder of the group Justice for Women, which opposes violence against women from a feminist viewpoint.

Image: ‘Women of the World, the rise of the female diplomat’ by Helen McCarthy, published by Bloomsbury